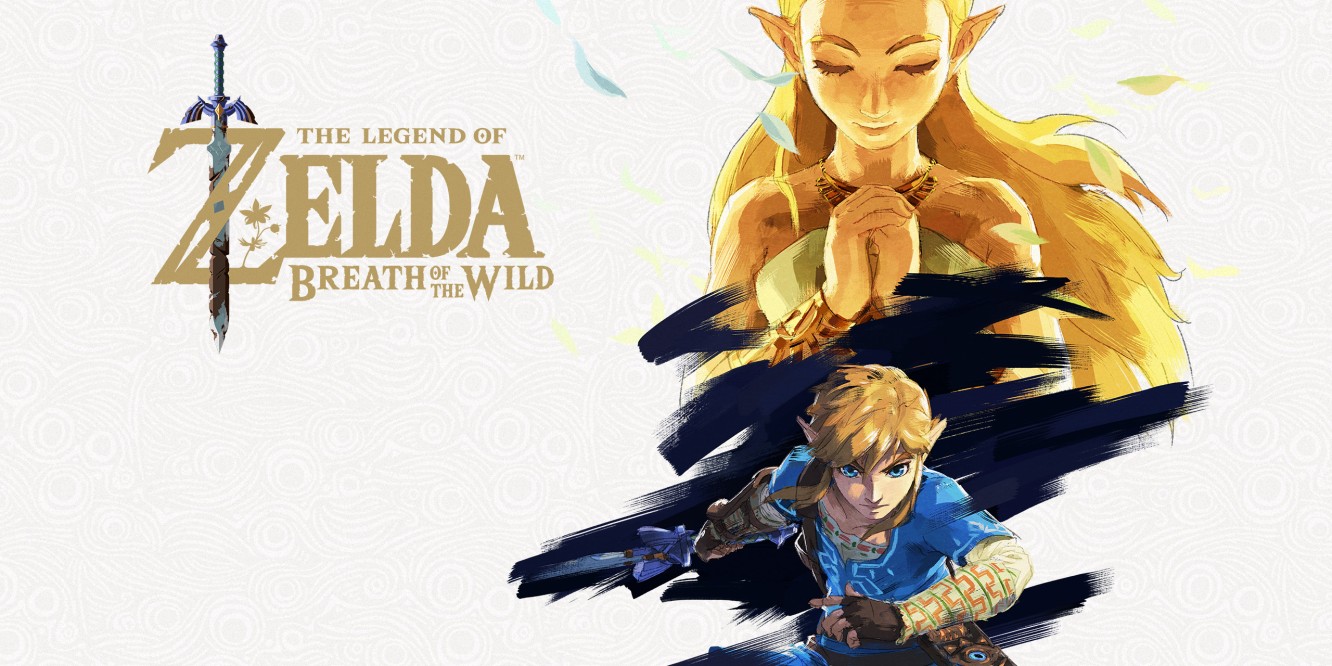 Welcome to Part 3 of my “First Steps” project which focuses on restrictions, guidance, and freedom in the initial moments of open world games. You may find it helpful to visit Part 1 for an introduction to the project and an overview of my line of inquiry. Last week I talked about The Elder Scrolls V: Skyrim, and in the coming weeks, I’ll be playing Horizon Zero Dawn, Fallout 4, The Witcher 3: Wild Hunt, and Grand Theft Auto V.

I hope you enjoy my observations and brief reflections on the opening of The Legend of Zelda: Breath of the Wild.

Spoiler Warning: While I avoid major spoilers for the games discussed as part of this project, know that minor spoilers may lie ahead. Discussion of each game’s plot/narrative elements does not exceed the first 2 1/2 hours of play.

The Legend of Zelda: Breath of the Wild (BotW) begins with Link waking up at the beckoning of an unknown female voice. The chamber, within what the player will discover to be a shrine, contains little, which draws immediate attention to the lone pedestal in the corner. Walking up, I accessed the pedestal and received a Sheikah tablet. A door opened, and I stepped into a long hallway containing two chests which provided a shirt and trousers. This discovery encouraged me to explore the inventory system briefly. Next, I observed some barrels and large crates which allowed me practice throwing and pushing objects, mechanics that would prove useful throughout the game. At the end of the hallway was another pedestal that opened a passage leading outside.

Light filled the chamber, and the female voice from before said, “You are the light—our light—that must shine upon Hyrule Again. Now go.” I climbed out of the Shrine of Resurrection and was immediately exposed to the landscape of the Great Plateau with its valleys, mountains, and forests. 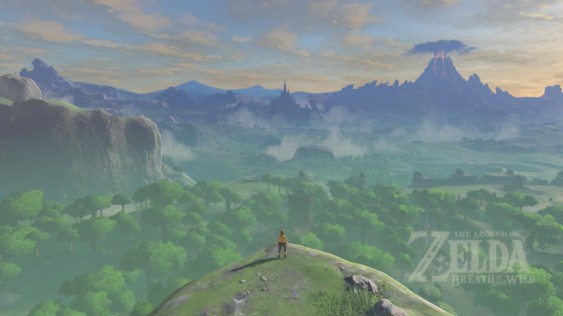 In the distance I could see an old structure and a looming, active volcano. To my right, through the trees and rock, I saw a trail. I followed it for a short distance before straying from the path down into a clearing to the left. This is when I heard the same female voice; she told me to head toward the location marked on my map. Despite the game’s guidance, it seemed the immediate vicinity was open for exploration.

I climbed back up to the path and saw a fire and a figure ahead. I approached and saw an old man seemingly oblivious to my existence. He didn’t beckon me over, but I walked up anyway. He began speaking of the Kingdom of Hyrule and of the Great Plateau before pointing to the temple which stood prominently ahead. I left the man by the fire and explored the temple, finding some bows and arrows inside. From there, I moved about the plateau, slowly making my way to the icon on the map.

At the marked location, I discovered a pedestal which activated a Sheikah Tower. The tower allowed me to download a regional map just before the voice told me to remember and explained that the world was threatened by a beast. She left me with the words, “You must hurry Link. Before it’s too late…” The sequence ended with a view of the castle under siege. Leaving the tower, I was approached by Old Man who mentioned that similar towers had appeared across the land. He spoke of Calamity Ganon and offered a paraglider in exchange for treasure, which triggered the next main quest. 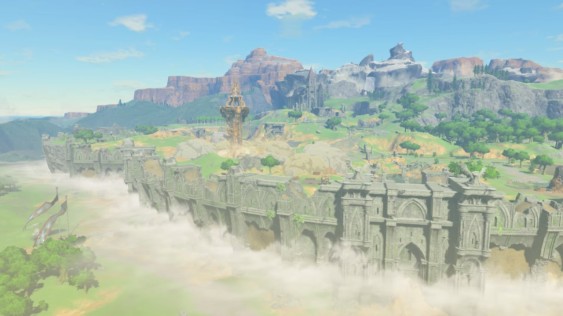 From there I explored the region and entered the Great Plateau’s four shrines, learning new skills and ultimately earning the paraglider, the virtual ticket off the plateau and toward freedom.

During the first five minutes or so of play, BotW‘s world appears to be fully accessible to the player. The Great Plateau consists of enough places to visit and provides enough activities that it could conceivably take players awhile to realize they are trapped in that segment of the map. Even though the plateau is open for exploration, the game guides players in some subtle and not so subtle ways.

The recurring female voice is one example of a guiding technique at play. Many of her statements urge players to move forward and also provide pieces of a context that will become more clear as players progress through the narrative. Her verbal guidance is especially vital in the beginning moments when players might not fully comprehend their purpose yet.

What players see—what they are guided to see and move toward—is also worth noting. Leaving the Shrine of Resurrection, players are immediately introduced to the game’s scope by the panning of the camera. This movement highlights the surrounding landscape and ends by directing the player’s attention to the right where a structure sits at some distance and where a man can be seen walking away from the player. Since the man is moving away, and he is the only person in sight, this compels the player to follow after him. 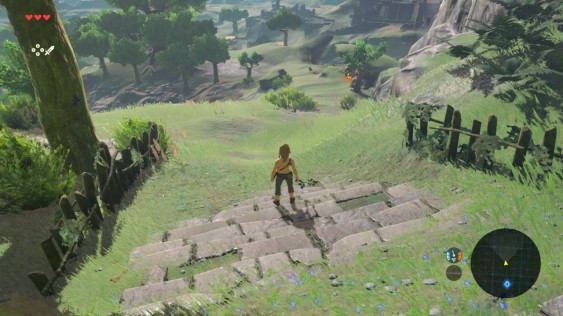 And if that isn’t enough, a trail is visible heading in the same direction. I didn’t immediately follow after the man but instead deviated from the path. However, when I was ready to return, I could see the sparkle of some apples on a tree and the glow of a fire near a rock formation—objects that were visually calling out for my attention. If I had not left the path moments before, I would have been naturally guided down to the fire and the old man who, of course, provides contextual information for Link’s journey ahead. The game provides several indicators to guide the player but it also doesn’t penalize the player who wishes to collect apples and Korok seeds or fight some Bokoblins before speaking to the old man or going to the temple.

As the game’s initial area, the Great Plateau serves as the tutorial, instructing players of the many activities that can be completed. Fast travel, combat, cooking, lore, shrines, clothing, and more are explored in the games’ first two hours before players are allowed to exit the plateau. While this area encourages players to take their time and to participate in a number of activities between and around main story quests, the game doesn’t really open up until after the rest of Hyrule is accessible.

While certainly not a linear introduction, BotW succeeds at introducing players to the frequent mechanics and tasks at play in the game. The game is also successful in creating a sense of urgency through various forms of guidance. Panning to The Temple of Time and the castle at key narrative moments served as visual cues for the player moving ahead, and the guiding female voice served a similar function, hinting at Link’s importance and abilities—establishing him as the hero the kingdom needs.

Thank you for reading, and please let me know what you think in the comments! Join me next week for a post discussing Horizon Zero Dawn!

I game. I teach. I write. Graduate student pursuing a PhD in Rhetoric and Writing. Interested in the use of video games in education, digital rhetoric, and literacy. View all posts by Tabitha

8 Replies to “First Steps: Freedom in the Open World (Part 3)”